HAT: out with the old, in with the new 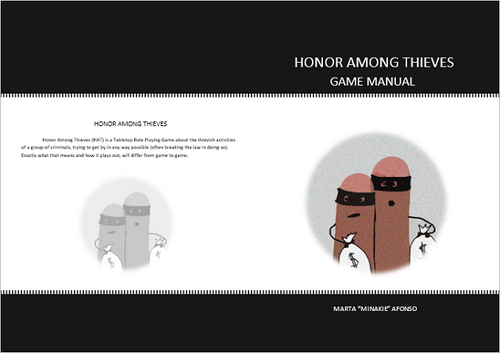 When I created the original version of HAT for the RPGenesis 2019 challenge, I had almost 0 knowledge of TTRPGs, and that shows. The game ended up being a messy impromptu collage of different systems, all mashed together, regardless of whether or not having those rules made any sense. At this point, is highly unlikely that the original version of HAT as created for the RPGenesis challenge will ever be updated again. Instead, the plan is to do a complete revamp of the game in two parts, one using a heist-focused system for the base rules (maybe Blades in the Dark?) and a small Lasers & Feelings hack as a teaser, for I learned that I just love to play with those.

HAT was originally created as a tribute to the Sly Cooper's video games, so the goal was to allow players to engage in acts of theft. However, apart from the title and the fact that the characters are thieves, the RPGenesis version of HAT had little in common with the video games by which it was inspired, mainly because at the time I was only familiar with one TTRPG system and all my design decisions were based on the little I knew. And, as we all know, what works for someone else might not necessarily work for you. Just because another game is good and popular, it doesn't mean that it's the right system to tell the stories that you want to tell.

The premise of the video games is that the group only steals from other criminals and considers it honorable because they are not stealing from "regular people". But, in HAT, it is nothing like that; you can be any type of criminal and not necessarily one with honor. When I made the adaptation for TTRPG, I also tried to define certain elements in a more abstract way, in order to allow for a more varied gameplay. Unlike Blades in the Dark, Leverage and Night's Black Agents, HAT doesn't have a specific setting or timeline, making it possible to run an adventure in the current days, medieval era, or in a futuristic setting; the rules text reinforces that idea and even provides examples of how to incorporate elements of magic or sci-fi.

Looking back, I don't think the original version of HAT is that bad, it's just not what it was meant to become. It ended up becoming a game that, by trying to be a bit of everything, ended up not really being anything in particular and, as a result, ended up becoming a generic thieves game, having failed to capture the essence of the video games as intended.

The idea of reviewing the game is precisely to reinforce this idea that they are not just normal thieves and that honor is worth more to them than money. That, along with the fact I am now more familiar with other systems, is one of the reasons that led me to take it back and try to give it a new life - I feel that the current version of HAT is not yet what I wanted it to be, and I think it has the potential to still get there.

The Lasers & Feelings version of HAT will be published in August of this year, during the RPGenesis 2021 jam. Once it is live, the old version of HAT will be removed from the main page. This is because, after reviewing v1.3 this year, I found a lot of loopholes in the rules. And I mean a lot. So, I don't think the current version of HAT is as playable as some people think it is. Even after several revisions, it still feels like an incomplete game to me and I would rather people would no longer download it. You deserve something that is finished. However, you'll still be able to find downloads for all the original versions on the changelog.

Get Honor Among Thieves

A sneaky micro TTRPG about a gang of honorable master thieves, who seek to only steal from other criminals.